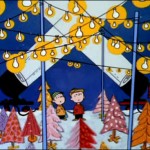 There are moments, usually somewhere between the fourth and fifth glass of eggnog, when I rank the first few scenes of A Charlie Brown Christmas among the finer artistic accomplishments of our age. The animation is rough-hewn, the voice acting hesitant, the writing somewhere between banality and camp. As art, it is the Gothic rejection of the perfect in favor of the sincere: a lesser stonemason may be allowed his gargoyle, and the cathedral is undiminished when the temple of Apollo would be utterly destroyed.

So if anything saves A Charlie Brown Christmas from itself, it is the sincerity of Charlie Brown, whose soft-spoken anxiety matures into desperation to know what, in a world of pink aluminum trees and impromptu freestyle dance, Christmas is all about.

And Linus’ sincere answer, a simple reading from the Gospel of Luke, is deeply troubling.

Tonight is Christmas Eve. There are lights on the gutters all throughout the suburb around me, and slightly less ridiculously, lights on the trees. There are presents in bright paper and newsprint awaiting morning (as in my family) or midnight (as in various Christmas-present-timing heretics). In finer houses than mine, a fire is burning on the hearth. These are good things. I even have a certain species of belief in them, a corollary to belief in a universe of small entire things.

But these are harmless, constrained quantities. No sane man overturns his life or works violence in their name, and if he suffers violence for them, he suffers for his home or children or hearth, his true object being the sustenance and joy of something good even when unadorned. The sure sign of this is the absurdity of the decorations and elaborate gift-giving, which escape ridicule solely because they are a kind of universal secret, a living and therefore charming irony.

The frippery, alone, is safe enough. It does not rise high enough to be perilous. When Santa Claus endeavors to sell me a Mercedes, there is no tincture of sacrilege, and if there is, it is only against Coca-Cola.

But harmless things are always somehow deeply unsatisfying. They have about them an aura of incompleteness, even of immaturity, that is disposed of only through the admission of certain risks. To become acquaintances is to note names and numbers. To become friends is to share a soul. Affection is the admission of regard. Eros is, among other things, the sacrifice of the body. Were we all to remain children, we would not remain good; we would simply remain children.

When Charlie Brown is left unsatisfied with the commercial overlays of the Modern Christmas Experience™, the point is perhaps less that they are dangerous than that they are not. They might distract and detract, but they cannot replace. Something in the human being demands that moment of risk, that commitment to something through which the rest of the world is to be read and measured and judged. Once we assert what Christmas is really all about, we indicate just how much tissue paper we are prepared to discard, and in what name.

Of course, these assertions vary in persuasive and aesthetic power. Family has been a popular one for decades, even if by family we now chiefly mean “people to whom I happen to be related” and “people whom I happen to like,” at which point the sine qua non of the Christmas spirit splits oddly down the middle, caught as it is between our own desires and the tendency of the universe to ignore them. On such misshapen horrors of abstraction as togetherness and wonder I shall not waste words, as they tend to become their opposites once ends in themselves.

But in the Gospel according to Linus, Christmas is all about peace on earth and goodwill to men. Here is not some particular good thing plucked from an array of choices; here is the best thing for earthly existence. Here is the possibility of utopia. And here, following, is the way to live for all humanity, and here is the promise of an eternity before which the world suddenly seems very small.

Family might be worth more than commercial trappings. But Linus presents something which claims to be worth more than the world—and recall that peace on earth is hardly a safe pursuit, nor one adopted without risk. Peace, whether shalom or the drifting silence of ruin, is the common object of war. Peace, set above all else, is far from harmless.

Tonight is Christmas Eve, and so much of the world must be laid aside, its vulgarity revealed in the light of a single hard white star. Perhaps the whole world. Perhaps family and home and nation. This is often taken as the claim of the great religions, Christianity among them: that before God, and before His promise of peace on earth, all else must be forfeit.

Which is the highest and thereby most perilous thing of all.

Some days ago, a young married couple, acting on what they believed their faith demanded of them, took the lives of fourteen people in San Bernardino, California. Some days before that, others acting with similar ends in mind struck in Paris, and so on around the world. Histories and peoples are being uprooted with the thoroughness and fervor that stems only from pure, axiomatic faith in the rightness of one’s own ground.

Tonight is Christmas Eve, a holy night, and the western world finds itself at war with an adversary that names itself religion.

I am troubled by this, as I am troubled by the near-sacrifice of Isaac and by the death of the Egyptian firstborn. If I am less troubled by Herod’s slaughter of the innocent in Bethlehem, it is only because I can comfortably call Herod a madman. And I have no answers, no persuasive ones at least. But I think that I can draw a useful distinction.

There is something human and humane about Christmas. It recovers and redeems the pagan, making the feast a celebration of more than life. It gives the family something to look on beyond itself, and if the members are drawn closer, they are drawn along convergent lines. For every austerity of Christianity, there is a balancing richness. What we have in Christmas, transfigured into elaborate metaphor, is a subtle elevation of lesser goods. The gifts are images of Gift, the lights of Light, the fires of Fire. The human gestures toward the divine, but is more human for it, not less.

Christmas, in other words, is a moment of intersection, a moment when something timeless touches time. Peace is peace on earth. If we object to the tackier frivolities of the holiday season, it is surely less because they are human than that they are not. There is something dehumanizing about a row of identical aluminum trees, just as there is something dehumanizing about the worst of the generic jingles. But the real things, the particular things, are those which have the greatest affinity for the paradoxical position of the human being, who is suspended between apish matter and angelic intelligence. The Christian who hates the merely crass must smile at the richly ridiculous, for the human being is ridiculous but often needs reminding.

The world does not fade into the background in Christianity. It fades into the foreground, and that which is hidden is made explicit. All our customs are a bit odd and more than a bit arbitrary, but the bright colors help us notice. The finest things are small, frail for all their eternality, and the twin figures of bright glass and dull manger drive home the point. We find that surprise and ritual are not opposites. We find delight in quiet joys inextricable from time and place, like stars that burned to mark the moment and went out.

The love of God, then, is the substrate of lesser loves as the love of home is the basis of delight in comical lights. The Christian loves heaven more than earth, but he loves earth more than the man who knows not heaven ever could. And this, I suspect, suggests the difference between one who lays aside his humanity for his God and one who lays aside his inhumanity. To borrow from Chesterton, the Ball and the Cross cannot despise each other, and though the Cross is higher, the sure proof of this is its power of free descent. The difference is between belief that commands self-sacrifice and belief that commands self-annihilation. One is the world made new. The other is no world at all.

So yes, the Gospel according to Linus is dangerous. Christianity, like any religion that makes a serious claim about the human soul and the wider world, is never tame. It can be misread. It can—and has—inspired terrible things. But all the same, I think that it makes love easier and hatred more difficult. And when it does demand hard deeds of its followers, whether in establishing justice or suffering its absence, it makes painful what simple abdication would make painless. It is no great thing to destroy or depart an evil world. It is a great thing indeed to serve in an imperfect one. Christmas Eve marks the moment at which the world receives what makes it good, what promises renewal and the healing of scars. Charlie Brown can delight in a tree because of a manger—and because of a cross.

Our celebrations are small and often silly things, but at their best moments they reach for eternity. We can smile upon our gargoyles because we have been smiled upon by a better Mason, and because the love that spilled out over the world—the love that demands not less than everything—offers everything and more. So merry Christmas, glory to God in the highest, peace on earth, and goodwill to men.

Because after all, that’s what Christmas is all about, Charlie Brown.

The poets and philosophers continue their war inside Thursday's head, making a general mess of the place and often disturbing the neighbors, who usually call the police once the theologians show up. He is a scholar of literature who lives (and will likely die) by the edge of his wit, delights in small beautiful things, sings dreadfully, apologizes well, writes too much, loves his friends dearly, and likes a warm hearth more than is strictly healthy. For all that, he hopes to be a good man.
View all posts by Thursday →