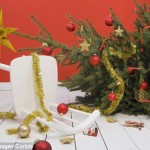 Every year my family struggles to keep up Christmas traditions. It’s not that we find our traditions onerous or time-consuming, so much as that we don’t find many traditions at all.

A friend of mine helped illustrate my family’s dearth of traditions when joining us for dinner one year. When I asked what he would like to eat, he suggested, “Make me a traditional family dish.”

This request stumped me for a while, considering that my dad’s favorite description of my mother’s cooking runs, “Enjoy it while you can—you’ll never see it again.” Casting about in my mind, I recalled a variation on a favorite Mexican dish we had cooked up.

“Okay…shrimp enchiladas. We made that last week.”

Your typical enchiladas call for beef, or perhaps chicken, with green or red sauce. Since we were substituting seafood in for the meat and mixing heavy whipping cream in the sauce to tint it pink, I figured that the dish represented the family tradition of experimenting in the kitchen.

Every so often, one of us will announce a new tradition. “Henceforth, this family shall…” Back in elementary school, for instance, my father decreed “the Twelve Hours of Christmas.”

According to this new family tradition, each child would open a present every hour. In theory, this scheme would compel us to slow down and savor every gift, instead of tearing through the wrapping paper like Tasmanian devils.

In practice, there is not much one can do with a box of chocolates or a new make-up kit for sixty minutes, not without dire consequences. We became very choosy about which gifts we selected to unwrap early in the morning, while the policy was still in force.

Once we graduated high school, and Mom lost her enthusiasm for stocking the tree skirt with boxes and bags, this tradition faded. Christmas Day itself faded. What were we supposed to spend all our time doing, if not unwrapping presents?

My sister and I made a stalwart attempt at taking over our mother’s gift shopping duties, but we burned out after a year or two. Piling presents on the mostly indifferent men in the house, even though Mom received her stash with enthusiasm, just didn’t afford the satisfaction we had hoped for.

The last two years we decided to go minimalist. Secret Santa with five people makes for a tricky selection process, but we managed it. “You didn’t pick your own name out, did you? Are you sure? Okay, don’t tell anyone!”

There was something delightful about revealing our best efforts to each other, in no small part because it compelled the men to get involved. My younger brother produced handmade sugar cookies—he even decorated them himself.

Dad made the present himself, too. Granted he made it by scribbling an “IOU” gift certificate on an index card, but, hey, it was a generous IOU.

This season, we have the chance to repeat the Secret Santa for the third year in a row. Once you do something three times, it qualifies as a tradition, right? Or at least a tradition-in-training?

“Ready for Secret Santa?” I asked the family over dinner last weekend.

My brother sighed. “Let’s do something else this year.”

A humble student of art, Whitetail aspires to make and do for the glory of her Lord. Her greatest treasures are her family, friends, and teachers. She writes to flash a bright warning to the world.
View all posts by Whitetail →